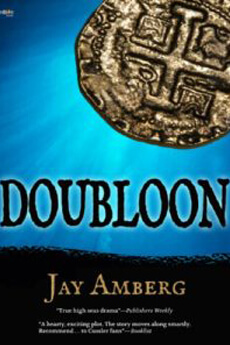 In the half-light of the Gulf of Mexico’s false dawn, the salvage boat Sea Devil capsizes and sinks, killing Nick Gallagher, a well-known treasure hunter. When his estranged son Jack, a recently retired navy fighter pilot, comes to Key West for the funeral, he discovers that the sinking may have b...

In the half-light of the Gulf of Mexico’s false dawn, the salvage boat Sea Devil capsizes and sinks, killing Nick Gallagher, a well-known treasure hunter. When his estranged son Jack, a recently retired navy fighter pilot, comes to Key West for the funeral, he discovers that the sinking may have been no accident.

Amid the torrid, honky-tonk atmosphere of Key West and the volatile weather of the Gulf, Jack Gallagher attempts to find out what happened to his father and why. He confronts a motley group: his father’s vindictive ex-partner, Cuban exiles, a Cajun dive master, a venal and pompous politician, a bombastic lawyer, a high-handed archeologist, and a sultry, seductive reporter. As he searches for answers, Gallagher inexorably becomes captured by his father’s obsession for the Magdalena treasure: a vast array of gold doubloons, silver ingots, exquisite jewelry, and priceless artifacts lost when a hurricane destroyed the Spanish treasure fleet in 1642.

A second dive accident, a burglary, a courtroom brawl, and another death all lead to the violent climax at the heart of a hurricane in the Gulf. Ultimately, Gallagher finds not only the truth about his father’s death, but about his father’s life, as well as his own, and about the real treasures in life: loyalty and friendship.

“A beautiful, combative reporter, some crafty Cuban expats and a raft of weather-beaten divers keep the plot moving at a steady clip. The final recovery scenes in the face of a raging hurricane deliver true high-seas drama.”—Publishers Weekly

“This action thriller is written in the Clive Cussler mode: a hearty, exciting plot; familiar characters…. The story moves along smartly…. Fans of high-seas adventures will no doubt stick with it until the end…. Recommend Amberg to Cussler fans….”—Booklist

“Amberg has great fun explaining the routines involved in diving for treasure, safe methods of decompression, how artifacts keep in salt water, and other seagoing details. Salty sailor talk. And the reader gets greedy for that bullion.”—Kirkus Reviews

“Murder, betrayal, and a fortune in lost Spanish treasure, Doubloon has all the elements of a terrific adventure tale and Amberg pulls them together like a master. This book never slows.”—Jack du Brul, author of Pandora’s Curse