Grown Gray in War: From Iwo Jima to the Chosin Reservoir to the Tet Offensive, the Autobiography of a True Marine Hero* 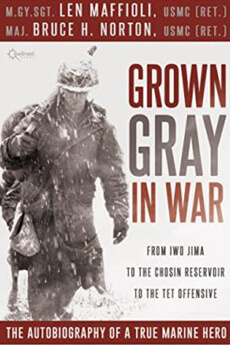 "Generation after generation of Marines have grown gray in war in both hemispheres and in every corner of the seven seas, that our country and its citizens might enjoy peace and security."—Gen. John A. LejeuneDuring his thirty-three years in the U.S. Marine Corps, Len Maffioli saw combat in World ...

“Generation after generation of Marines have grown gray in war in both hemispheres and in every corner of the seven seas, that our country and its citizens might enjoy peace and security.”—Gen. John A. Lejeune

During his thirty-three years in the U.S. Marine Corps, Len Maffioli saw combat in World War II, the Korean War, and the war in Vietnam. Maffioli was only eighteen when he stormed Saipan on D-Day in 1944. Shortly after, he was involved in combat operations on Tinian and Iwo Jima–and that was just the beginning of a long and distinguished career. In Korea, he was captured by the Chinese Communist Forces and endured icy prison camp conditions so appalling that four out of ten POWs died. Yet Maffioli not only survived, he escaped and earned himself the Bronze Star. He went on to see combat in Vietnam and serve in many posts and stations around the world, distinguishing himself not only as a combat veteran, but as the very definition of a “Marine’s Marine.”

Vividly depicted by the deft hand of experienced author and Vietnam combat veteran Bruce “Doc” Norton, Grown Gray in War is the story of a man who could be anyone’s father, brother, or son, a man who served in a series of wars that changed the Marine Corps and the nation forever.