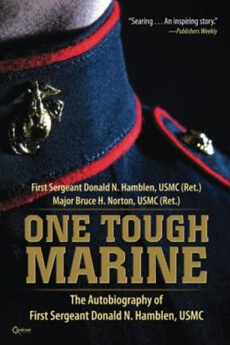 “This is the . . . powerfully told story of an exceptionally determined human being.”—Booklist

During a routine parachute jump, strong winds drove Hamblen into high tension wires at the outskirts of Camp Pendleton, California. Doctors were astounded that he had survived, but five days later his leg had to be amputated five inches below the knee.

For most people, this would be the end of the story. Hamblen could have retired on medical pension, but for him, leaving the Marines was not an option. He fought to remain in the Marines, passed all of the arduous physical tests, and within eleven months was going to the field, parachuting, and scuba diving with First Force Recon Company.

With more than two years in the super-secret Studies and Observation Group (SOG), he is one of the few Americans who can document having fought repeatedly in North Vietnam, and by his extraordinary example, he served as an inspiration to other badly wounded soldiers. This is his incredible story of courage, spirit, and self determination.

“I have been associated with countless service personnel during my lifetime and Sergeant Hamblen tops the list of selfless, dedicated, all-American tough Marines. Words are inadequate to portray his life as fully as he has lived it, but his biography will serve as an inspiration and be a worthy model to be emulated by all who would aspire to be among the few good men—the Marines. As one of the ‘Godfathers’ of the Marine Corps deep reconnaissance, it has been a privilege to have known and served with Woody Hamblen. Semper Fidelis.“—Herman Nickerson, Jr. Lt. Gen. USMC (Ret.)