The Brenner Assignment: The Untold Story of the Most Daring Spy Mission of World War II 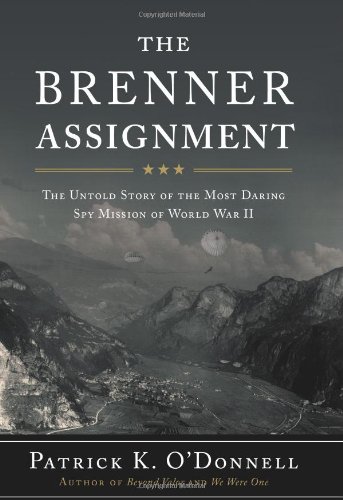 Like a scene from Where Eagles Dare , a small team of American special operatives parachutes into Italy under the noses of thousands of German troops. Their orders: link up with local partisans in the mountains and sabotage the well-guarded Brenner Pass, the crucial route through the Alps for the Nazi war machine. Without the supplies that travel this route, the German war effort in Italy will grind to a halt.

Using thousands of recently declassified files, personal interviews, and private documents, including a behind-the-lines diary buried in a bottle, military historian Patrick K. O’Donnell has written a cinematic World War II adventure story. The unforgettable cast of characters includes the dashing and daring team leader; the romantic idealist who plans the operation; the seductive Italian countess who is also a double-agent; and the maniacal SS officer who will stop at nothing to kill the team and their partisan collaborators. The Brenner Assignment is also a World War II story that resonates today, revealing lessons for the war on terror and illustrating the complex nature of insurgency.

Packed with action, suspense, intrigue, and even romance, this exciting true tale of survival and sabotage behind enemy lines is one of the greatest untold adventure stories of World War II.