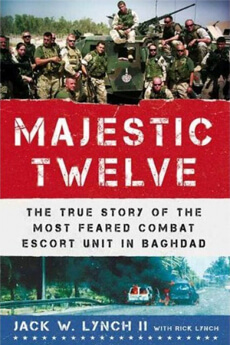 On February 11, 2004, United States Marine Corps Master Sergeant and military historian Jack W. Lynch II arrived in Baghdad’s Green Zone to find a Headquarters Company nearly paralyzed with fear, timidly crouching as virtual prisoners behind the walls of Hussein’s commandeered Presidential Palace. Convoys between the Palace and Camp Victory, 5.4 miles down Baghdad’s highways, were attacked with amazing regularity by Iraqi guerillas, and why not? After all, official Headquarters policy was plainly and simply “Run! Run! Run! Under no circumstances engage the enemy; take the fire, put the pedal to the metal, and run!”

The team (one woman and twelve men) was handpicked and trained by Master Sergeant Lynch and from day one their trademarks on Baghdad’s roadways were swift and lethal violence and a battlefield flamboyance not seen since the days of Civil War cavalry.

Individually they were known as Maji Knights, collectively they were The Majestic Twelve, and they stalked the Palace Highway praying for any excuse to dismount their vehicles and exterminate the enemy in close combat. Wherever they went, with radio call signs like “Trick Shot,” “Rockstar,” and “Machinegun Kelly,” wearing Arab shamocks rakishly about their necks, using the enemy’s AK-47s, their vehicles audaciously emblazoned with their custom designed “dagger & serpents” logo, they left behind stacks of Iraqi dead, and an enemy brutalized by shocking violence and an unrelenting tornado of lead and fire. This is the story of over 200 combat missions run over some of the most dangerous roads in Iraq. It is also the story of American ingenuity that overcame the obstructionism, indifference, and even outright hostility of a timid and frightened higher command. Most importantly, it is the story of a tight knit unit that rose above it all with a single-minded determination to do anything required to win the war. In the end, their faith in the competence, fairness, and justice of their superiors would be destroyed, but their faith in their mission, their country, and, more importantly, each other, would remain solid. This is the story of The Majestic Twelve.

“One unexpected aspect of the Iraq war was how quickly it developed into a struggle for control of the roads against an enemy increasingly expert in every kind of ambush technique, from remote-controlled improvised explosive devices to civilian-screened ambushes. Not for a century had U.S. forces’ responses been so correspondingly ad hoc. Lynch, a retired master sergeant, is a marine of the old school who brought 23 years’ experience as an infantryman to the problem. His solution was to create a convoy security force, the Majestic Twelve (which borrowed its name from the purported committee of scientists formed to investigate UFO activity). They were volunteers, individualists impatient with the routines of straight duty and bonded by a mission. The team made over 200 escort runs, never lost a man, and had a set of dramatic combat experiences and run-ins with higher authorities. Lynch, however, controls his narrative by blunt honesty about even his sexual urges after a fight. This is a useful addition to a growing body of Iraq War combat literature. “—PUBLISHERS WEEKLY

“A valuable addition to Iraq War literature, this is the portrait of of a particularly effective convoy-escort team. Army and marine personnel joined to carry out one of the most hazardous duties in Iraq, escorting supply convoys along roads beset by snipers, ambushes, and increasingly sophisticated improvised explosive devices. The Lynches vividly depict the team welding itself together as well as the distressing lack of support it sometimes received from the rest of the American military. Master Sergeant Jack Lynch emerges as a senior marine NCO in the classic mold, not always a happy warrior when he confronts marines not much interested in fighting, but one thoroughly loyal to the men for whom he has responsibility. No fighting force can do without such men; the marines have the sense not to try.”—BOOKLIST

“Tells a poignant story…Lynch draws the reader away from the politics of war and introduces the people fighting and enduring it. He gives a name, face, and a story to the misunderstood tribe of the American warrior…this is where Lynch’s work shines.  He reminds us that a family is a cohesive group of individuals with different personalities…This is a beautiful phenomenon of the warrior culture that many will never understand but one well articulated in THE MAJESTIC TWELVE.”—PROCEEDINGS

“WOW! The Majestic Twelve is a front seat ride into combat at its most dangerous point. A must read.”—Jack Coughlin, USMC, NEW YORK TIMES bestselling author of SHOOTER: THE AUTOBIOGRAPHY OF A TOP-RANKED MARINE SNIPER

“THE MAJESTIC TWELVE is the story of the team that invented successful urban convoy security tactics, and they did it the hard way–on the road to Baghdad International Airport. Master Sergeant Lynch brings all the military virtues of the Marine Corps to this mission–a brash attitude toward authority, a commitment to mission success, an ability to forge an effective small combat unit, and the ability to skillfully engage enemy forces in close-quarter combat.”—Hans Halberstadt, author of TRIGGER MEN 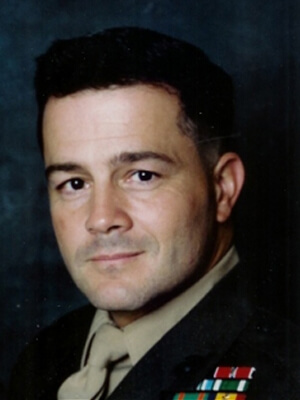 Jack Lynch is truly a “Marine’s Marine.” He has over twenty years infantry service, and is a veteran of the Panama invasion, the first Gulf War, and the  Iraq War. He was twice decorated for valor in Iraq, including winning the Bronze Star with “V” (for valor) device. Lynch, a master small-unit tactician and leader, also possesses military and geopolitical knowledge well above that normally found in an enlisted man and many officers.

Lynch wrote about his Iraq experiences in the Majestic Twelve, a harrowing account of fighting an enemy his superiors often preferred to let get away, and other units ran in fear from, rather than stand their ground.  Lynch retired from the Marine Corps in September 2005 and since his retirement he has worked as a Senior Operations Advisor for a small Virginia-based company.  In that capacity he has had multiple deployments to Iraq, Kuwait, Germany and Italy.