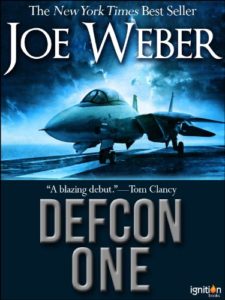 From the acclaimed thriller writer, Joe Weber, comes a chilling novel of the Cold War.

From the acclaimed thriller writer, Joe Weber, comes a chilling novel of the Cold War.

The United States and Soviet Union are at the brink of war. Fearful of US plans for an anti-missile defense system that could defeat a USSR first strike, the Soviet General Secretary, the conservative successor to Gorbachev, conceives a plan to act first.

Russian Bear bombers violate US airspace, leading to a response by American F-15s. A US Navy battle group is attacked in the North Atlantic. And in orbit, a Soviet hunter-killer satellite attacks an American space shuttle.

As the world careens towards a nuclear conflict, only a lone CIA operative stands between peace and utter destruction. But can he act in time?

Vividly portraying the real world of military hardware and combining it with page-turning action, DEFCON One is the definition of a classic thriller.