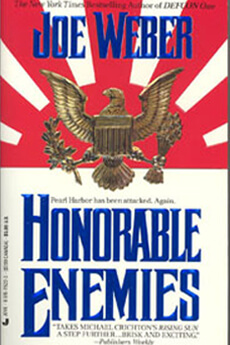 HONORABLE ENEMIES paints a chilling post-cold war scenario that might be taken from today’s headlines. Pearl Harbor has been attacked… again. This time, by a helicopter, which strafes a Hawaiian cruise ship, killing several Japanese tourists. The shock waves from the tragic attack go straight to Washington and Tokyo. In retaliation, American tourists are ambushed in Osaka. Relations between the two countries are deteriorating and threaten to escalate out of control. The White House assigns Steve Wickham from CIA and Susan Nakamura from FBI to get to the bottom of who is behind the attacks. They uncover a deadly conspiracy of enormous proportions reaching into the highest levels of the U.S. and Japanese governments.