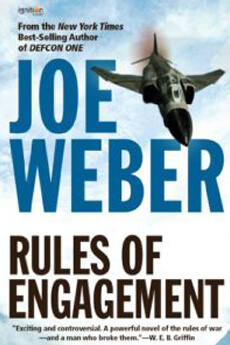 From the New York Times Best-Selling Author of DEFCON One"Exciting and controversial. A powerful novel of the rules of war—and a man who broke them."—W. E. B. GriffinMarine pilot Brad Austin and his carrier-based F-4 Phantom group fly into the heart of enemy territory daily without fear, but the...

“Exciting and controversial. A powerful novel of the rules of war—and a man who broke them.”—W. E. B. Griffin

Marine pilot Brad Austin and his carrier-based F-4 Phantom group fly into the heart of enemy territory daily without fear, but the rules of engagement hinder them nearly as much as the North Vietnamese. Restricted from attacking the enemy’s MiG bases, Austin and the other American pilots are vulnerable to attack without the ability to retaliate, a weakness that tragically leads to the death of Austin’s wingman. Consumed by the need to avenge his comrade, Austin goes one-on-one with the enemy in a battle that ultimately proves in war there can be no rules.

In a fast-paced, thrilling look into the life of a Vietnam War fighter pilot, Joe Weber takes us high into the flack-filled skies above Hanoi and shows us the air war as only a veteran fighter pilot can.

Joe Weber “does an admirable job of evoking in such readers a visceral understanding of the restrictions that precluded victory in Vietnam. In Rules of Engagement, Weber’s political points will hit close to home, and they will strengthen the resolve of many, such as myself, who are determined never to allow the mistakes of Vietnam to be repeated.”—Senator John McCain

“Weber’s writing has a great deal of panache. His knowledge of military hardware is impressive, and his edge-of-the-seat scenes are thrilling.”—The Book Reader